Nervous systems must not only generate specific adaptive behaviors, such as reproduction, sleep, foraging, feeding, aggression, grooming, etc., but also must select a single behavior for execution at any given time. This requires neural mechanisms for action selection that are sensitive both to internal physiological states and to external environmental conditions. 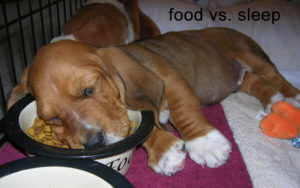 Everyone experiences the difficulties of “multi-tasking”: performing more than one action at the same time. This is because our nervous system has evolved mechanisms for enforcing exclusivity of incompatible behaviors, presumably to ensure that each individual behavior is performed effectively, efficiently, and without interference. For example, it is important that during sleep other behaviors—such as sex—are suppressed, and while performing waking behaviors sleep is suppressed.

We are interested in how animals choose among sleep, feeding, fighting or sexual behaviors using the fruit fly Drosophila melanogaster as a model organism. There are many hypothesis for how different behavioral modules are interacted and selected, and below are two appealing ones: first, a higher-level executive system could exert top-down control on the modules driving distinct behaviors (central selection); alternatively, modules driving distinct behaviors could directly influence one another through reciprocal control (distributed) (Redgrave, P., Prescott, T. J. & Gurney, K, 1999, The basal ganglia: a vertebrate solution to the selection problem? Neuroscience 89, 1009-1023) 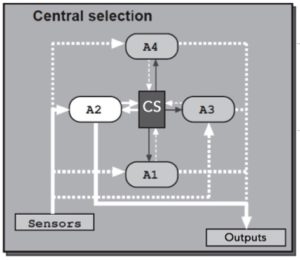 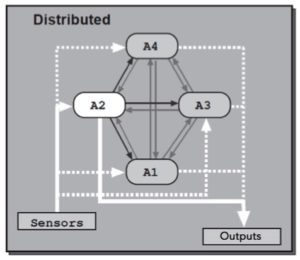 We have an initial study on this fundamental question using sleep and sexual behaviors as models, and identified neural substrates and genes that are crucial for the interaction between sleep and sexual behaviors, and such interaction is sexually dimorphic. Check out the paper by Chen et al., Nature Communications, 2017, and a follow up study by Zhang et al., Neuroscience Bulletin, 2018.

Nature vs. nurture: how animal behaviors are generated

How the potential for animal behavior is built into nervous system is a fundamental question in neuroscience. It is generally believed that animal behaviors are controlled together by nature (genes) and nurture (environment), but how these two factors jointly control animal behaviors is still poorly understood.

Male courtship behavior in D. melanogaster is a wonderful model system to study such question. A male fly is able to perform a series of courtship behaviors including tapping and following a female, extending and vibrating a wing to generate a species-specific love song to arouse her, licking her genitalia and attempting for copulation by curing his abdomen, even if raised in complete isolation from egg to adult. Decades of studies found that such innate courtship behavior is controlled by the male-specific products of the fruitless gene (fruM).

On the basis of the above finding, We further discovered that D. melanogaster males can acquire courtship behavior through two alternative pathways. The first pathway, having the two sex determination genes  fruM and dsxM both expressed in the nervous system, is exclusively genetic-dependent. Such pathway has reproductive advantage as males court specifically conspecific females, which is used by modern day courtship. The other pathway, in the absence of fruM, allows the nervous system to acquire courtship with dsxM and social experience. The latter pathway may be evolutionally conserved as dsxM related genes are found throughout the animal kingdom. See Pan and Baker, Cell, 2014. 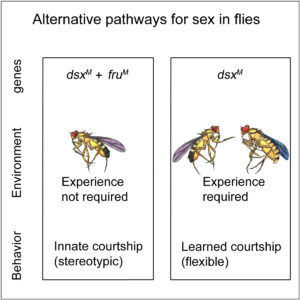 We are curious to understand how genes and environment together control behaviors by studying from tiny fruit flies to high-order organisms (such as mammals). We will continue to use male courtship behavior in D. melanogaster as a model system to study the following questions: (1) How does dsxM function in the nervous system to allow male courtship in an experience-dependent manner? (2) How does social experience affect the nervous system in molecular and neuronal levels? (3) How is the dsxM– and experience-dependent pathway different from the innate fruM-dependent pathway?